What We Didn’t Know 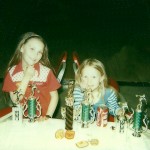 At bowling last night, I was reminded of the early years of bowling for us and our kids. Bob and I started bowling when our girls, Corrie and Amy were three and two years old. Since we enjoyed bowling so much, we knew they would too, so we started them on a bowling league at Sunrise Lanes when they were six and five years old. The league was short on coaches, so I took the class to become a coach, and I became the coach of the younger children on the league. After a couple of years, the league at Sunrise Lanes dwindled down to just a few, and the league at Eagle Bowl needed bowlers and a coach, so we made the move to Eagle Bowl. Little did we know that the move to Eagle Bowl would change so many things, not only for us and our girls, but really for my whole family. Connections were made that we would cherish for the rest of our lives.

As it turned out, one team that really needed bowlers was two little girls…sisters, named Jaime and Jackie Morton. They were about the same age as Corrie and Amy, and they got along well. The four girls bowled together for a number of years, and then my nephew, Barry Schulenberg decided to bowl on the league. I told Donna, Jaime and Jackie’s mom, that Corrie and Amy were going to bowl with their cousins that year. She seemed disappointed, but asked if I had a team for Jaime and Jackie. I told her, “Yes, they are bowling with Corrie and Amy.” Confused now, she said, “I thought they were going to bowl with their cousins.” When I told her they were, she was completely baffled, and with good reason. 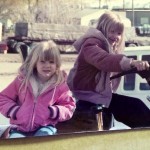 and Donna Morton to my mom, she was surprised, and she told me who they were. I explained to Donna that Corrie and Amy were Jaime and Jackie’s cousins. She was shocked, until I explained that her husband, Ted’s grandmother Gladys Pattan Byer Cooper, was my grandmother, Harriet Pattan Byer’s sister. Not only that, but Ted’s grandfather, Theodore Byer was my grandfather, George Byer’s brother, making us double second cousins, because my grandmother and her sister had married my grandfather and his brother. That made our girls double third cousins. So while the girls did bowl with my nephew, Barry, who was their cousin, that year, we all found out that they had been bowling with cousins all along.