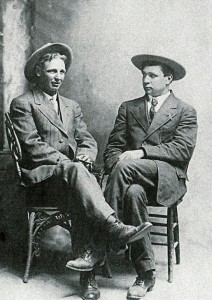 I have noticed in the family history books that my Uncle Bill Spencer put together over the years, that people in the family, or maybe that era, would sometimes just pick up and go visit a different branch of the family…often without much or any advance notice of their impending arrival. I suppose that sometimes they just got excited about finding out about a different branch of the family, and decided to go check it out for themselves. Being a bit shy around strangers, family or otherwise, I find this type of visit to be very strange indeed. What do you say to those people after the initial, “Hello, You don’t know me, but I am your relative from Wyoming.” I would simply have no idea. That is probably why most people who do go to visit relatives they don’t know or don’t know well, take someone else with them…to help carry the conversation. I can’t imagine going alone, and yet that seems to be the norm for some people.

My grandfather did just that when he went out to visit his Aunt Tessie, as did his brother, my Great Uncle Clifford. Oddly, both of them just dropped in on Aunt Tessie!! I don’t know if Uncle Clifford just liked what he heard about Aunt Tessie from his brother, my Grandpa Allen Luther Spencer, or if he was curious about her and her family too, or if he even knew of the prior visit by a member of his family, but he went, and he went alone. I also have to wonder what Aunt Tessie thought of the whole thing…like, “What is it about me that makes these people keep just showing up here?” It appears to me, as it did to my Uncle Bill, that my cousin Cornelius Davis, who was Aunt Tessie’s son, found his cousin a little strange, or maybe the entire visit was just strange to him. It’s possible that he was wondering why these relatives just popped in like they did too, without any advance notice…or maybe he was wondering just how long this guy planned to stay.

Bob and I have gone many times to visit his family in Forsyth, Montana, but we always told them that we were coming, and our stay was just a week. I guess, in days gone by, when it takes a long time to get somewhere, it didn’t make sense just to stay a week, because it probably took several days driving out, so if all you had was a week, you would have to turn around and leave again. Still, I can’t imagine going for a visit without letting anyone know. Of course, the phone was not widely used in those days, so it would mean a telegraph, but it seems that many people just went and didn’t worry about it. Whatever the case may be, my cousin Cornealius seemed to think it was rather a strange visit indeed.