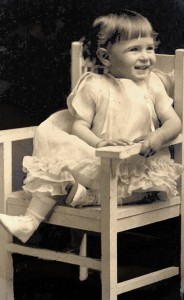 In the months since connecting with so many of my cousins on the Schumacher side of the family, we have found out that one of the original six children of Carl and Albertine Schumacher was not represented among the cousins. I set out with renewed determination to see if I could find out more than the little bit of information we had, which is that Mina Schumacher married John Spare, and they had one daughter, Pauline Jessie Spare. Someone thought that Pauline had two daughters and two sons. That was pretty much the extent of our knowledge of Mina’s family. Then I came across a tree on Ancestry.com that had a little bit more information. I found out at that time, that very sadly, Pauline had passed away in June of 2013. That information left me feeling both sadness, and great loss, because we had been so close to finding her and yet, we were so far. We were too late to have the chance to know Pauline.

I felt like I was stuck. I went back to the family tree that I had found on Pauline, and looked at the name of the owner…Julie Carlberg. We had thought that Pauline’s children were John, Lisa, Kristin, and Timothy, but when I looked at the home person on this tree, it was the daughter of Pauline. I wondered if Lisa, whose middle initial is J might be this Julie. I sent a message through Ancestry to Julie, but then I noticed that she had not been on in a couple of months. Then, I decided to look on Facebook, and I found her there, but she doesn’t get on there much either. Nevertheless, through a combination of these two places and the information I found there, I was able to Google her and found a work email…which is where I hit the jackpot!!!

I sent her an email on Monday night, and could hardly wait until Tuesday to see if she would respond…which she did. I am very excited to say that the cousin search just took a great big upward turn. Not only did I find Pauline, who went by Paula, but I found her four children, Lisa and her children, Jenny and James; John, his wife Diane, and their daughters, Allison and Abigail; Kristen and her sons, Jonathan and Timothy (yes there is a Timothy in the bunch, just not a son, but a grandson); and of course, Julie, her husband Andrew, and their three children 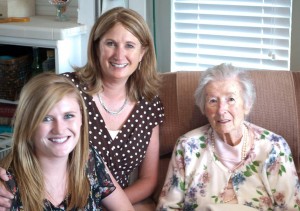 Kevin, David, and Kendra. Julie was able to confirm that a picture of a little girl, who after a little thought I had suspected might be Pauline, was indeed Pauline, and that a large copy of this picture had hung in Pauline’s room. I also received a much more updated picture of Pauline, along with Julie and her daughter, Kendra. So now I believe that our family is much closer to coming full circle from complete disconnect to very connected, and I am very excited about getting to know these newly found cousins. This has been such a wonderful journey, and I thank God for each and every one of the precious cousins that He has now connected.