A Whole Lot Of Trouble 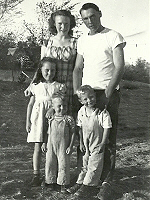 Bob’s Uncle Butch is the youngest of his dad’s sisters and  brothers. While he is Bob’s uncle, he is only 9 years older than Bob is. That said, I’m sure you can imagine that at some time during those years, they had similar interests. In fact, probably there were several times that they had similar interests, and for that reason, Butch probably didn’t seem like an uncle, exactly. Bob had spent several weeks in the summers up at Grandma and Grandpa’s house, which are Butch’s parents. That contributed to a closer relationship as well, I’m sure. So, when Bob was out of high school, and living on his own, he and his friend, Paul went up to visit the family in Montana.

They were staying at Grandma’s house, but one evening, they decided to go out with Butch. At that time, it was legal for Bob and Paul to drink, so the three of them went to the bar…mainly because there isn’t a whole lot of other things to do in Forsyth, Montana, due to it’s small size. They three of them had an…interesting evening. While sitting in the bar, and with Bob and Paul being somewhat inexperienced in the art of drinking, Butch had them try several drinks that he liked. Well, maybe some people can mix different kinds of alcohol and have no problem, but Bob and Paul were not those people. By the time they left the bar, both Bob and Paul were pretty tipsy…and that, is an understatement.

They headed back out to Grandma’s, and went to bed. The hangovers they had the next day…well, lets just say that Grandma was not happy with Butch. He was in a 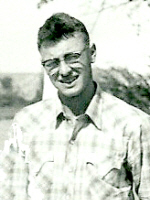 lot of trouble, in her book. Somehow, she didn’t think it was appropriate for him to corrupt Bob and Paul, and she made that fact known to Butch. To say he was in the dog house…is putting it mildly. Grandma wasn’t ever one to drink much, and I’m sure that had a lot to do with her feelings on the situation. Plus, I suppose, she felt responsible to my father-in-law to make sure that his son was not turned into a delinquent, not that Butch’s action were a detriment in any way. Personally, I like to think it was me that straightened Bob out, but I would guess that he might argue that statement.

Bob and Butch have always had a great time together, and getting in trouble with Grandma, didn’t change that one bit, but it is something none of them ever forgot, nor have I, when I heard about it. Today is Butch’s birthday. Happy birthday Butch!! Have a great day!!