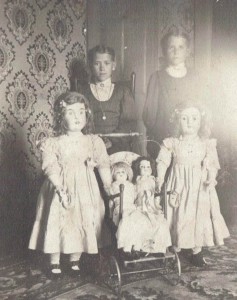 As I have been going through the pictures from my grandmother’s album, I keep coming across pictures with life sized dolls in them. I know that all little girls like dolls, but these dolls seem to have some special significance to them, as they were so often included in the pictures, and even photographed by themselves. That seems rather strange to me, but I guess the times could have been different and different things were done. Still, when you start seeing pictures with a young man looking at the dolls, you have to wonder if there is simply something more to this. I have my own theory on it, so let’s see if you agree.

I really don’t think that most young men would want to be photographed with a doll. It just isn’t how most boys are. Still, 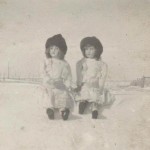 here were multiple pictures of dolls and this one with the young man and the doll. It started to occur to me that possibly, there was one or maybe several doll makers in my family. It is probably something I will never know for sure, but the pictures do indicate a definite connection to the doll world.

It reminds me a little bit, of the way pets become a part of the family. Here we have dolls in the pictures, like they are one of the kids. And the really great thing is that these dolls even look like people. The doll maker did a very good job on them.

They looked so real. I suppose the doll maker looked at it as an art. And today, with everything being mass produced and computer stamped, a doll with a hand painted face would be a very rare item indeed.