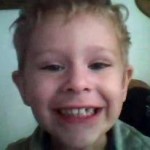 My grand nephew Ethan is 4 years old today, and at this age, he is really coming into his own. He has lost the toddler aspect of his personality, and it has been replaced with a little boy with ideas of his own. He knows what he likes and what he doesn’t. And he doesn’t mind telling you what he thinks about it. Oh, don’t get me wrong, Ethan is a very well behaved little boy…he just knows what he wants to do. His mom, Chelsea told me the other day that he wanted to come to my office, which just happens to be just down the street from where he lives. He tried very hard to insist on it, but it wasn’t a good day for Chelsea to 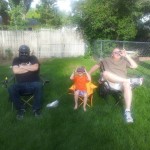 bring him. That just melted my heart. Ethan is such a sweet boy, but it never occurred to me that he might enjoy stopping by my office for a visit. It was just such a sweet little moment, and I told Chelsea that she would have to bring him by real soon.

Ethan has a shy side too, though. Sometimes at church, when he feels like maybe there are just too many people around, he will hardly talk to me or anyone else but his parents, grandma or his aunts. Of course, that doesn’t include the other kids, because Ethan is all about playing with the kids…any kids. He loves his little neighborhood friends, his cousins, and his friends at school, and he loves his teacher, who he often calls Mrs DeHaigler, 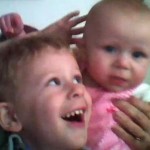 instead of Mrs Haigler…a mistake that I find very cute, as I’m sure his teacher will too.

Ethan loves to laugh, and loves to hang out with the guys. If his dad or grandpa are doing something, it just must be cool, and Ethan wants to be a part of it. He is all boy, and loves doing the guy things that boys love to do. And Ethan loves to make his little sister laugh. He loves being a big brother, and loves having a live in playmate, and of course, Aurora thinks Ethan is the greatest big brother ever. On that one, she could be right…or biased, but you’ll never convince her of that. Happy birthday Ethan!! We love you!! Have a super cool day!!