I am often amazed at how big my grandson, Josh has grown. Especially when I think about the early start he got. Josh was born 5 weeks early. His weight wasn’t too bad at 5 pounds 6.5 ounces, but his lungs were underdeveloped, so he went to Denver for 2 weeks to get stronger. Once he came home, he decided to catch up on his lost time. Josh began eating like a horse, and before long, his weight was up to normal, or even a little chunky for his age.

That didn’t last very long, because as soon as he started to grow, he was a little bean pole…so much so that his mom said he had bird legs. And hungry! That boy was always hungry,  especially for treats!! You would expect him to be fat, but he wasn’t and at 14, still isn’t.

As to those underdeveloped lungs…well, I think they are just fine. Josh likes track meets, and last year he took first in the 400 meter race, finishing in just 1.07 minutes. And he wasn’t even badly out of breath. He ran so fast that second place was about a fourth of 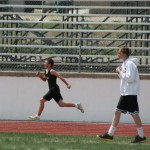 the track length behind him. It was an amazing race.

Josh continues to amaze us with everything he does, but lately I have been especially surprised by his height. It looks like he might be the tallest of my 4 grandchildren, and I expected him to be more like the shortest of the boys…until he was 3, that is, when his height indicated that he would be taller.

With him being as talk as he is and the youngest grandchild, I find myself a little sad. Those grandbaby years are over, as they are almost adults. It just doesn’t seem possible. They should all still be little.