Relationships With The In-Laws 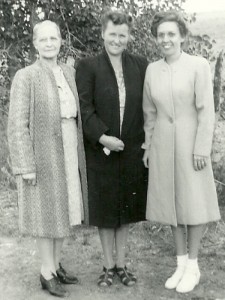 Daughters-in-law come in many forms. Some can be difficult to get along with, and some can be simply impossible to get along with. However, some can be sweet and special, and easy to get along with. Of course, that works both ways. Mothers-in-law have been notorious to sticking their noses in where they don’t belong, or at least many have been given that bad rap in the past, whether they were really like that or not.  But when the relationship between mother-in-law and daughter-in-law is a good one, it can be very rewarding to all concerned. If they will allow themselves to get along, they might just find that their mother-in-law, or daughter-in-law can be very helpful, now and for years to come.

I can’t say for sure, but it seems to me that in years past, there was less discord between in-laws, be they mothers, fathers, daughters, or sons. Bob’s great grandmother seemed to have a very pleasant relationship with with her daughters-in-law. While they didn’t always live near each other, they did for a time, and the way I understand things, they enjoyed spending time together.

I think that relationships with the in-laws, are to a very large degree about working things out together. It is about each person being understanding of the feelings of the other person. People have good and bad days, and with understanding, and acceptance, people can get along. That is the only way those relationships can work. I’m sure that through the years there were mother-in-law/daughter-in-law relationships that were horrible, because that is the way things go in this world, but I truly think that the relationship between Bob’s great grandmother and her daughters-in-law, was a very good one. The little bit of time that I had the pleasure of knowing Great Grandma Knox, Grandma Knox, and Aunt Helen, I can honestly say that these women got along famously. Great Grandma Knox made several trips to visit her daughter-in-law, Bob’s grandma with her other daughter-in-law, Bob’s Aunt Helen, and his Uncle Frank. They enjoyed each other’s company, because they chose to not only get along, but to like each other.