After All…What Are Big Brothers For 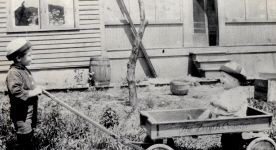 My dad was the younger brother. His sister Laura was 12 years older than he was, and his brother was 2 years older. Later there would be another sister, Ruth born in the family. The two brothers were, like most boys, always into something. I think Uncle Bill was so excited about having a little brother, that he set out to become a one man entertainment committee for my dad. He loved to make him laugh, and Uncle Bill could be quite funny…and mischievous. Through the years the two boys would get into lots of mischief, but when my dad was a little boy, his brother Bill was all about being a good big brother. He took his brother outside and played with him…which was a help to their mom too. He kept him laughing, and taught him how to do things…maybe not always a good thing.

Dad loved his big brother, and like most little boys, loved having his big brother pull him around in the wagon. But then what kid doesn’t. The wagon is almost like having a car, except that you have to find a motor for it, and the best motor is a big brother who doesn’t mind doing all the work, so his little brother, or sister, can have a good time. And Uncle Bill was a good big brother. He and my dad had lots of adventures, many wagon rides, fishing trips, and other such good times, but after all…what are big brothers for. 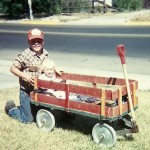 Like my dad and his brother, Barry and his brothers, JD and Eric are best of friends to this day. I think there is a bond between brothers that is very special. They are friends no matter the age difference. Yes, sisters have that too, but it is very different than brothers. When I look at how these boys were with each other, its easy to see that the little guys look up to the big guys…want to be just like them, and the big guys, whether they admit it or not, think their little brother is the greatest. They want to show their little brothers the ropes, do the guy things, and help them grow into good men, because after all, what are big brothers for.