The Thrill Of Victory 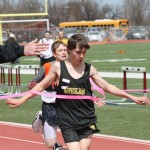 Today is the first track meet of the year for my grandson, Josh. He is the only one of my grandkids that really likes track. The others have done it a time or two, but Josh loves to run, and so the track part of the meet totally suits him. He has really been training for the track meets all of his life…even before he knew what a track meet was.

Josh and his big brother, Chris used to come to my house in the mornings and when it was time to go to school, they would walk the half block to their elementary school. I say that they walked, but that was rarely the case. Mostly they had a race to see who could get there first, and except for reminding them to look both ways for cars, I simply enjoyed watching the race to see who would win today.

When these races first started, Josh was pretty little…a Kindergarten, grade school newcomer. At that age, his strategy was…outsmart the big brother. So, he tried to distract his big brother so he could get the upper hand. They were supposed to go out to the sidewalk and start the race at the same time, but Josh always managed to figure out a way to get a head start. I know that he figured it was his only way to win, since his brother, Chris is 2 1/2 years older than he is. And at in those early years, Josh was probably right.

Then as Josh grew, things began to change. Josh worked so hard at beating his brother, that he grew stronger and quicker. He started winning a race or two…which was surprising

to his brother. We had to start making Josh was until I said, “On your mark! Get set! Go!” Otherwise the races were no longer fair to Chris. Still, even with the new fair starts, Josh was winning more and more. Not always, but winning fair and square.

Those early races were not to practice for future track meets, but they did stimulate a love for running and racing that has carried Josh into this sport. He has tried the field events, but they don’t give him the excitement of the run, the wind in his face, and the thrill of the victory that racing gives. Running is where he shines, and I, for one, love to watch the race. Go get ’em Champ!!