On The Helping End 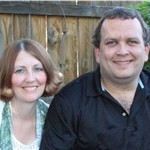 Once in a while, you find yourself in a situation that requires you to be someone’s hero. That is the situation my son-in-law, Kevin and my daughter, Corrie found themselves in yesterday evening. Coming home from work, at about 5:15 pm, Kevin saw a little girl walking up and down their street, crying and obviously freezing. The temperature was about was about 20 degrees at that time. As Kevin got out of his pickup, the little girl let out a scream of frustration, fear, and cold. Kevin turned around to see what was going on, but was concerned that the little girl would not come to him. He went in the house and got Corrie, telling her that he thought the little girl might be lost or hurt.

When Corrie stepped outside, the little girl turned and started to walk away…obviously afraid. Then, after taking about 4 steps, and knowing that she was in a lot of trouble, and could die without help, she turned back around and started toward Corrie. Corrie asked her if she was lost, and she said that she was. Then, she hugged Corrie with such deep gratitude that it almost brought tears to Corrie’s eyes. Corrie said, “Oh my gosh, you are so cold!!” She shivered and said, “C-c-c-cold!” Corrie asked her if she knew her address or phone number. The answers were no to both questions. She is in Kindergarten.

Corrie asked to look in her backpack to see if there might be any information in it. She found a hat, mittens, a small notebook, and a juice box. The little girl’s coat was on but unzipped. She told her to come into her house so she could get warm and they would find her parents. She asked her how she got to where they found her. She said she rode a bus and some kids usually walked her home, but they weren’t on the bus yesterday. She thought she could make it home alone, but got lost. She had walked about 4 blocks from the bus stop, but who knew how long she had wandered around during the hour and fifteen minutes before they found her.

The little girl knew the bus number, so Corrie called the bus garage, and said, “I don’t know if you can help me or not, but I have a little girl at my house who got lost walking home from the bus stop.” The person answering the phone immediately said, “Is her name…?” Corrie asked the little girl and confirmed that she indeed had the right little girl. They told Corrie that her parents don’t speak English, and they had been calling the bus garage, frantically trying to find their little girl…their only child. They were certain their worst nightmare had happened to their little girl. The bus garage dispatched a bus to pick up the little girl, now warm from being in Corrie and Kevin’s house, wrapped in a blanket, and snuggled up with the family cat.

What do you do after an evening like that. Your adrenaline has been pumping like crazy. You have found yourself on the helping end of a parent’s worst nightmare. You were the hero. You saved the day, and more importantly the little girl. You got her safely back home to her terrified parents. What does a hero do after something like that…well, if you are Corrie and Kevin, you don’t shout it from the rooftops. You wouldn’t have even told your mom if she hadn’t called at the moment you were on the phone to the bus garage. No, if you are Corrie and Kevin…you simply go to Walmart to buy groceries.

4 Responses to On The Helping End