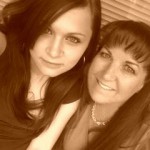 When I look at my granddaughter, I see a beautiful girl, who is bubbly and very cool. She has changed through the years, but she has always been beautiful. Many people have told me that she looks like me, and maybe she does, but she is far prettier than I am. Still, I see some things about her that do look like me. Sometimes, you have to look back on things to really see them. Recently Shai took a picture of her and me, and pointed out that we have the same eyes. I hadn’t seen that before. They aren’t exactly the same, but they are close…except when she smiles, her eyes take a little upward turn on the outsides, that is so pretty.

I had been told that my daughter Amy, Shai’s mom looks a lot like me and looking back on her pictures, I can see that too. Amy looks very much like me in the face, but with her blond hair, it is a little harder to see, for some reason. I had thought that my daughter, Corrie looked like me, but in reality, she looks much like my mother-in-law, and the only reason I thought she looked like me was her hair color. Perhaps, that is why I thought people saw similarities between Shai and me. Shai’s hair is brown like mine, and our coloring is the same, so looking at the pictures, it’s easier to see the similarities. Still, I did not see them until, I looked at the picture Shai took. Then, as with Amy, I could see that we do look a lot alike.

When you have kids, and even with your grandkids, you always want them to look a little bit like you. I guess it is just human nature…the desire to reproduce another person who looks a lot like you. Maybe it is a way of connecting with our children and grandchildren forever. Or maybe I have had this on my mind because I have been researching our family tree. In doing so, I have seen many faces. Some that look like people I know, and some 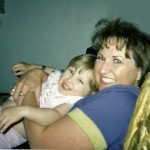 who don’t. The similarities can be in sisters, brothers, parents, grandparents, children, aunts, uncles, and even cousins. It is quite interesting to see. So often, it takes someone who never knew the people involved to really pick out those similarities.

Still, sometimes when I look back on those old pictures, I am very surprised. I was going through my old pictures from when my grandchildren were real little, I found this one of Shai and me when she was just a little girl. It is one of my favorite pictures of the two of us, but as I looked at it, it occurred to me that Shai has a smile like mine…just like mine, in fact. I find that simply amazing.