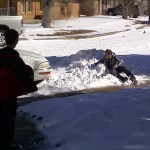 It is a comment most of us have either heard as children or said to our kids or grandkids…or both. “I’m going to throw you in the snowbank!” It was a comment that usually set the child on the receiving end to laughing, and maybe wondering if you would really do it, or if you were just kidding. The funny thing about it is that it was something that seldom really happened, and to be honest, I have often wondered why.

It is such a funny thing to think about…a big guy, usually the dad or grandpa, or uncle as had been the case in this scene, would pick up a kid, carry him out side, and deposit him in the snowbank. The kid comes up sputtering as they wipe the snow off of their face and try to get it out of their clothes, as it melts and runs down their skin causing that shocked feeling that can only happen when cold snow hits warm skin. Their shouts of shock and…well, stunned disbelief at just how cold it was. I think in this case, however Caalab actually liked it, and I know Josh got a big kick out if it.

Most kids love playing in the snow…throwing snowballs and building forts…building snowmen, and yes, being thrown in the snowbank. It is what makes wintertime so much fun for kids, who don’t even seem to notice the cold. They have a built in heating system it seems. I remember those days myself, and I look back now and wonder why the cold didn’t bother me very much. I suppose it all comes down to the amount of fun you are having in the snow, and kids can sure find a lot of ways to do just that. 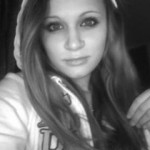 It is the wonder and pleasure of playing that we seem to lose as adults, that they still have, that makes playing in the snow so fun. My granddaughter, Shai is like that. She loves the snow and wants it to snow every day from October through March. I have started to try to see the snow through her beautiful eyes, and I have learned that whether you are playing in the snow, building a snowman, or just enjoying the peace and quiet of a snowy night, there is a beauty and wonder that is attached to the snow, if you just take a moment to look around and see it. I have often thought about the phrase, “stop and smell the roses”, but maybe we should also stop and look at the snowflakes…at least once in a while.

3 Responses to Snowbanks and Snowflakes