Did You Pinch Me? 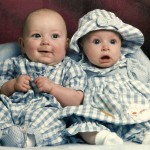 When Christopher and Shai were born, just one day apart, many people thought they were twins…at least those who didn’t know they were cousins. I suppose part of the problem is that they were together much of the time, and people just see two car seats in the back seat, with two babies about the same age, an immediately assume that they are twins. Amy’s mother-in-law thought they were both so cute together, that she bought them a matching set of boy and girl outfits, and asked that we take some pictures with them in the outfits. We made arrangements to have the pictures taken, and did our best to take the picture she wanted. However…the best laid plans do not always produce the best results.

Christopher was always quick to smile, but Shai was a little more…jumpy in those early years. We tried over and over to get both of the kids to smile at the same time, but as is normal with kids, that just didn’t happen. The kids were about six months old, and as we all know, it can be tough to get two 6 month old babies to be happy at the same time. Still, we persevered and took whatever possible shots we could. I can’t say that the picture taking process was a very successful endeavor, but the end result was better than we thought it would be.

The best picture we could get is the one you see, and while Shai is being fussy, the picture has a charm all its own. We have always wondered what the problem was, and many have speculated about it. But, I think by far the cutest one was the idea that Christopher is smiling in that mischievous way because he just pinched Shai, which would also explain her face. I’m sure that at 6 months of age, any pinching that might have happened would be entirely by accident, but the look on their faces is just so classic, that we couldn’t help but think it could have happened just that way…or maybe Shai was just having a bad day. We will never really know what the problem was, but the picture is so precious, no matter what was going on.

2 Responses to Did You Pinch Me?