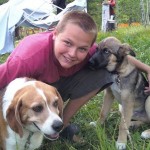 My grandson, Caalab loves dogs..all dogs. His goal is to have one of every kind. A lofty goal, considering the sheer number of breeds out there, but he also plans to own a place big enough to handle it, at least he is planning ahead. So far he has two dogs. Rhythm is a Beegle, and Blues is a Husky/Shepherd mix. Yes, they really are Rhythm and Blues. Caalab’s dad, Travis works for the radio station, and does a blues show, so it stands to reason.

Rhythm is an older dog, And he doesn’t like to do much…in fact never has…except when Travis decides that Rhythm needs to do some dancing. Then he holds his hand above Rhythm’s head and sings “Rhythm is a dancer!!” Rhythm dances around and around. Other than his dancing, he has always been pretty lazy…probably the main reason he is much heavier than Blues. Rhythm would eat constantly if you would let him, but he will do it is a way that takes the least amount of work. That became very obvious the other day when my daughter, Amy fed Rhythm and he started eating and after a few minutes, he got tired. So he laid down on the floor in front of his bowl and proceeded to continue eating while laying down. Never had my daughter seen such a lazy dog.

Blues is the younger of the two dogs, and he is interesting in that he has one blue eye 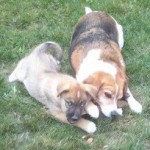 and one brown eye. He is rambunctious like most puppies and younger dogs are, and he keeps things hopping around their house. Blue thinks water is a toy. Watering the lawn or any other use of water is open season for Blues to chase the water and try to eat it. One time when Amy had the hose and was playing with Blues, she was dancing the water around, and Blues was jumping up and down trying to catch the drops as they came down. At one point, he slipped on the wet ground and landed on his side. He let out one little yelp and that was it. He was back on his feet and back at it…chasing the drops. With two silly dogs, there is never a dull moment. It’s free entertainment.