A Bolt Of Lightning 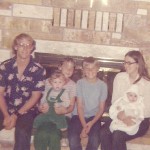 When our girls were little, Bob and I took them to Helena, Montana to visit he Aunt Marion’s family. Aunt Marion was Bob’s dad’s older sister. She and her husband John lived in Helena with their 8 children. Bob and I had not gone to see them since our marriage, and we were on our way to visit his mother’s grandmother, so we decided to take a couple of days to visit Aunt Marion and her family too. It was September and the weather can be unpredictable.

We were going to run a couple of errands, and the sky was clouding up. Aunt Marion suggested that we leave the girls at the house in case it rained. So we headed out to the store. We completed our shopping much more quickly without two babies to carry too, so we were thankful that Aunt Marion had offered, and of course, her kids were excited about having some time to play with their little cousins too. And our girls were having such a good time when we left, that we knew they would be fine with it.

Nevertheless, I had an uneasy feeling as the sky got more and more black and the clouds began to look menacing. As we finished up our errands and headed back to Aunt Marion’s house, the lightning and thunder began. The weather almost reminded me of tornado weather, and I definitely didn’t like that. As we pulled up to Aunt Marion’s house their was a flash of lightning directly in front of us. The lightning hit the power line in front of her house, and literally danced along the power line for several seconds. I had never seen anything like it. Now I had a new dilemma. To go into the house…under that power line, or to stay in the car and leave my babies 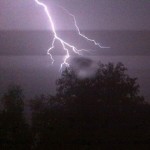 in the house with that monstrous lightning storm threatening my girls. I knew it was unreasonable. The girls were in no danger, but I just couldn’t get past the obstacle that stood between me and my girls.

Of course, everything was fine in the house, and I was just being silly, but I can tell you this. Seeing lightning strike…in any of the dramatic forms that can take, is something that you never forget, and to this day I can still see it in my mind. That has been 35 years ago, and I have never seen lightning strike in front of me again, something I can honestly say I’m not sorry about, but I will never forget the day in Helena, Montana when I did.