For Love Of Little Boys 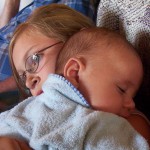 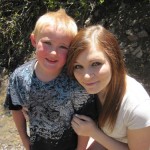 Some people just seem…destined, maybe…to always be around little boys. It seems to start at a very young age too. My daughter Amy, was like that, as is her daughter, Shai. Both of them started babysitting little boys at an early age, and boys just seemed to be their destiny, so to speak. It’s not that they didn’t like little girls or babysit little girls, but it just so happened that it was mostly little boys. Like they attracted them or something.

Even as a little girl, Shai seemed to love to hold the little boys. And as she grew and began babysitting, it was the boys she understood best. She would play their games, and take their pictures. Her phone was filled with goofy pictures of Jenny and Steve’s boys, Xander, Zack, and Isaac. Of course, there are a lot of hugging pictures too, as the boys really love Shai a bunch. They can always be seen hanging around her…even if she isn’t babysitting. They are like her own boys, in a way…of course, not to replace their own great parents, but just a very special bond. And the bond Shai and Jenny share is very special too. Of course, Shai and Steve have a bond too…he picks on her, and she picks right back. I don’t think any of them would have it any other way.

And when Shai is babysitting, the boys know they can be themselves, because she is very understanding. She might even take a picture of them “being themselves” as you can see. I just hope the two of them don’t kill each other, because the babysitter seems preoccupied in picture taking. No…this is just an example of the boys hamming it up because Shai is taking pictures. They are about the goofiest little boys, and they love to ham it up for the camera. In reality, they loved doing just about anything Shai could think of, because she instinctively knew what fun stuff boys would like.

Of course, like any babysitting job there are the little boo boo’s and the real fights, but Shai and her 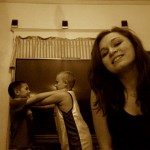 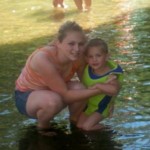 boys just took it all in stride and got on with the important stuff…having fun. And they did. In fact, I can only think of one time Shai babysat them that wasn’t so much fun. She was babysitting during a Tornado Watch, and had to take the boys to the basement. While it was a scary situation, Shai handled it well, and even though the boys were scared, they did ok because Shai was there to talk them through it. It was almost as good as having their parents at home…almost, but not quite.

One Response to For Love Of Little Boys