Nowhere Else To Go 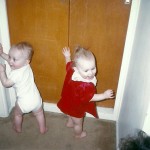 Little kids are so much fun, and your grandkids would have to rank right up there at the top. They have such an innocence and wonder over life. Everything is new and exciting to them. It is so fun to watch.

When Christopher and Shai were little, they were going through all the new experiences together, since they were only 1 day apart in age, Christopher being born on February 28th, and Shai being born on February 29th. We had such a great time with them. Every new thing, every excitement, every experience, we had times two. What a cool blessing to have both my daughters become mothers one day apart. Even though one was a boy and one a girl, they went through all the same experiences at the same time. Slightly different in the things of boys and girls, but many were identical too. It was wonderful.

It was great playing the little games with them that I had played with their mothers. People who aren’t grandparents don’t know how cool it is to get to watch two generations of their children go through all the newness and excitement of those toddler years. That wonder of learning and playing. And with your grandchildren, you just feel differently about it. You don’t feel like you should be somewhere else, doing something else. You aren’t the parent. You are free to simply enjoy. No responsibilities to make sure they grow up right, not that you don’t want that too, but the responsibility belongs to your children now. You have earned the right to simply play with the kids. It is a very liberating feeling.

This particular picture looks like two kids just playing in a hallway, but if you look very closely at what Shai, my granddaughter, is looking at, you will see the real reason for the looks on their faces. There in the corner of the picture is their grandmother…me. We were playing “I’m gonna get you” and they were doing everything they could to get away, only to put themselves in a position of nowhere else to go. The next few seconds included delighted screams and giggles. I had caught them, and it was quite a moment.