A Brother For Christopher 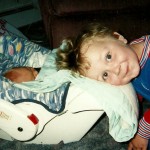 My oldest grandson, Christopher had to wait the longest to get a sibling. He spent a lot of time with his cousins, Shai and Caalab, so he got to see first hand how it was to have a little brother, and while Shai didn’t always like it, Christopher thought a brother would be the coolest thing ever. For Shai the wait was 16 months, but for Christopher it would be 2 1/2 years.

Christopher and Shai did so many things at the same times, and I suppose he thought this should be no different. Sure, he liked playing with Caalab and maybe that was a little like having a little brother of his own, but it really wasn’t the same. And he wanted it to be the same. I suppose having a male cousin was the next best thing…for a while

Finally it was to be his turn, and his parents knew that the baby would be a boy from the ultrasound. They told Christopher that his brother’s name would be Joshua and that they would call him Josh. So Christopher called him Josh from the time he learned of his coming. He was so excited that he was getting a brother too. His very own brother. One that could stay at his house. He was one happy little boy. Josh’s arrival was marked by some problems that would send him to Denver for 2 weeks, much to Christopher’s 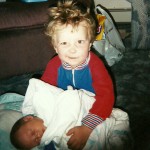 dismay, but soon he would be home and Christopher would be a big brother…finally!!

Christopher loved his little brother and completely enjoyed helping his parents with Josh’s care. He wanted to be a part of everything. He was careful not to wake the baby when he was asleep, but when he was awake, he wanted to hold him and, of course, play with him…but that would have to wait. So he settled for holding Josh, but occasionally that didn’t go too well. It’s a good thing he was sitting on the floor at the time, and it’s a good thing babies are resilient, because Josh had a big brother.