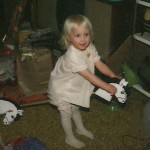 We have all at one time or another in our lives, been interested in horses. It just seems to be in our nature. We might go from a rocking horse, to a stick horse, to one on wheels, and eventually to one that is powered by horses. We even name our cars, school mascots, teams, etc, after horses a lot!! There is no doubt…we love horses.

When I was little I had a favorite rocking horse, that I trained to make ruts in my mother’s hardwood floor. We also had a German Shepherd dog named King, that my sisters and I used for our horse…and he was just gentle and kind enough to allow that.

My girls had a stick pony that my father-in-law made for them, which they loved. He gave them the ponies when they were 2 or 3, and they rode them for hours. Oh, the adventures they had! They headed out west, to play Cowboys and Indians…or just rode out across the plains to see what might lay on the other side of the hill…all this of course, in their imaginations, because they never really left the yard. But, that didn’t seem to matter. In their minds, they were explorers, or cowgirls, or just country girls out on a lark. They were on their ponies…just like at Grandma Hein’s ranch.

We went to visit Grandma and Grandpa Hein every summer, and my girls just adored them. Going to their ranch was that adventure come true. They explored the barn and found eggs hidden outside the chicken coop, where the hen was hoping to keep them safe for hatching, and avoid having them used for breakfast. They wandered over that next hill to see what might be there, and found an old play house where they would spend countless hours living in the old west.

And…they would get the chance to ride a real horse once in a while. Grandpa 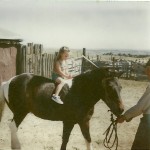 Our trips to Grandma and Grandpa Hein’s ranch every summer were a rare treasure that my girls got to have, and one I will always be glad we gave them. Grandma and Grandpa Hein always made them feel so very special, as they did Bob and me. They were Bob’s grandma and step grandpa, but to us that didn’t matter. Grandpa was just Grandpa, and they were wonderful. We love and miss you both!!