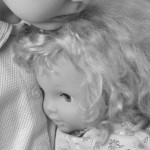 Most people remember little about their early years, but sometimes something happens that causes you to keep it in your memory all your life. Often these early memories are from traumatic or perceived traumatic events. Such is the case with me.

I was 2 years old when my family moved from Superior, Wisconsin to Casper, Wyoming. On our way, we camped out. Unlike today, people camping out might get to know their “camping neighbors” and even know their names. Such was the case with our family when we met the Sims family.

They were such nice people, and they were moving too. They had two children, but they were older than my sister and me. Our families had a very nice evening, and the next morning we left the campground and went on our way. It wasn’t until we had gone many miles that I would realize that I left my doll at the campground. I was devastated. I mean she was my baby!

When I was 3 years old my parents bought the home my mother still lives in today. As we settled in, and started to get to know the neighbors, we were very surprised to find that our neighbors across the alley just happened to be the Sims family. It was like so nice to move into a neighborhood and already know some of the people. And even better was the moment when they told me that they were hoping to see us again, because on the day we left the campground, I had left my doll, and they had saved her for me. I was elated.

Our families would live across the alley until Mrs Sims passed away. Mr Sims and their son Harold had passed away before Mrs Sims, and Julie had married and moved to Colorado. We were friends all that time, and Julie babysat for my parents until my sister was old enough to babysit. They even went to the same church as we did. They were a wonderful blessing to our family, and someone we always glad we got to know.