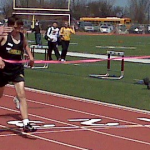 Today I went to my grandson, Josh’s track meet and had a wonderful time. Josh did quite well in his events. It was his first traveling athletic event, and he was very excited. I look forward to the rest of his meets over the course on the next month. I want to congratulate Josh on his great events.

While the track meet was the reason for our trip, I did find myself annoyed at the number of people who refused to listen to the announcer and show at least some measure of respect for the school that hosted this event. There were not so many requests, but it would seem that lots of people believed that they were not required to follow the rules. There were the number of people who would not get out of the way…as there always seems to be, but there was one couple that particularly annoyed me.

When the announcer asked that no food or drink be on the Astro-turf field, as a spill would cause permanent damage, this couple stood right where they were, him with his soft drink, refusing to move. And in addition to that, the people behind me commented that they shouldn’t be so worried about it, because it couldn’t damage it any more than all the “blood and spit” from the football games. I found that equally annoying, as I’m quite certain that the acid in that pop would cause more damage than blood.

That is not really the point anyway. They assumed that the school’s rules were not worth their obedience. No wonder our kids act like they don’t have to follow the rules. This is the type of example some parents set for their kids, and others who just happen to be able to see them. When we travel to another school for events, lets at least have the decency to show respect for the school that invited us.