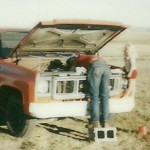 Bob and I had daughters, and Bob is a mechanic, so when it came to assistants, well…he usually had one or two small ones. Bob always said that girls need to know how to work on their own car…just in case. I guess he figured that if he started early enough, they would adapt to it, just like children learned English. So, whenever he was outside working on a car, he would have one or both of the girls standing on the bumper, or a box or sitting on the fender, watching…and learning, of course!!

In fact, early on it became pretty obvious that mechanics was going to be a…well, part time profession, at best. Before he knew it, they became interested in different forms of transportation. 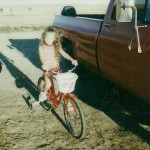 But, the reality is that while their dad is a great mechanic, our girls are totally not mechanically minded. They are just very sweet girls who love their daddy, and would do just about anything for him…even pretend that they enjoy checking the oil in their car. How blessed Bob is!