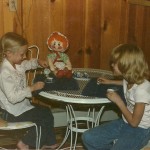 Friends often go in and out of our lives, as our interests change, especially when we are young, but once in a great while, something very rare and very special occurs. That very first friend becomes a forever friend. Such was the case between my daughter, Amy and her friend, Carina. The girls met on the first day of kindergarten, and from that day to this, there has never been a time when they weren’t friends. Carina became so much a part of our lives, and Amy a part of Carina’s family’s, that we both said that they were adopted daughters.

When Amy came home from school that first day, I asked her how she liked school, and all she talked about was her friend Carina. Little did I know that this…Carina, was about to endear herself to our family for life. Rarely did a weekend go by without those girls spending the night one place or the other. They both just became a fixture in the home of the other, and none of us seemed to think it was the least bit odd.

As the years went by, their interests changed, but always seemed to include the other in 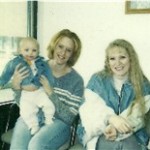 some way. They both loved gymnastics and later they were both in the Kelly Walsh Dancers. Carina’s career as a flight attendant would take her all around the world, while Amy’s life would keep her right here in Casper, Wyoming, and into her marriage, but no matter how far apart they were, they remained friends. After 9-11, Carina’s life would change again, and bring her back to Casper, and later into her marriage. And now, they are closer than ever.

Once in a while, a rare friendship occurs, and that is what happened between two little girls named Amy and Carina, and our lives would never be the same…and that is just fine with me.