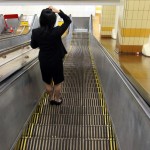 A few years ago I was watching a show that used to be on television called “Rescue 911” about a boy that wandered away from his mom, who was on the phone with his dad, and ended up in a terrifying situation. They were in a mall or airport or something…that part I don’t recall. What has stayed in my head was what happened afterward. The boy was excited about their upcoming adventure, and ended up stepping onto the escalator  without his mom. She was only distracted for a moment, but that was all it took. Not knowing the danger, he simply sat down. The boy was wearing a sweat suit…the next level of danger. When he got to the bottom, his clothing got caught in the teeth of the escalator, and he was trapped. A young man saw it and tried to tear his clothing so he could breathe, but with a sweatsuit, it was impossible. Just before his life would have been ripped from him, the young man rescued him, by hitting the kill switch…thankfully. I’m sure that boy has never forgotten it. It is embedded in his memory for life.

I know, because when I was about 4, my mom took me and my sisters to tour the new bank in town. We had gone upstairs via the escalator. The bank was beautiful, and we all had a great time. mom decided that it was time to go. We went to the escalator, and she helped me on. My sister stepped to the side to look at something, and seconds later, my mom and my sisters got on the escalator, about 4 or 5 steps behind me, with people in between us. There was an older woman about 2 steps in front of me, and when she reached the bottom, she panicked. She began to back step. It wasn’t her fault really. She was scared. But, I was just a little girl.

When my feet ran into the old woman’s feet, it pushed her off of the escalator, but I fell down. Back then it was common for little girls to wear frilly dresses with a full skirt, especially when going somewhere special. That dress was quickly pulled into the teeth of the escalator. My screams could be heard all over the bank. The manager came running. He assured my mom that the bank would pay for all medical bills and buy mea new dress. He begged us not to sue, which my mom had no intention of doing, but he didn’t know that. True to his word, the bank took care of everything…that they physically could.

Over 50 years later, I still cannot step on an escalator without feeling a lurch in my gut. It is no one’s fault, it is just part of who I am. Traumatic events…even in the very young, just don’t go away easily. I felt nauseated while I was watching the episode of “Rescue 911” that night. I was still able to vividly remember those events. When the program was over, I was shaking. It was more real to me than anyone could ever know.

I know it was no one’s fault, and there was nothing my mom could have done, but I want to tell everyone to be careful on escalators, especially with children, as it could easily cost them their lives, if they are caught in one of these. I have seen people allow their kids to take a ride on the escalator…alone. I want to yell at the parents…ask them, “Don’t you know what could happen?” But all I can do is stand by and pray the God will protect those unsuspecting parents and kids. Please…don’t let your kids ride an escalator alone!!