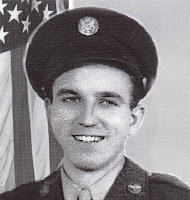 My dad joined the Army Air Force in March of 1943. The Army Air Force was a branch of the service that was pretty much unique to its time, and no longer exists today. Dad was trained at Miami Beach, Florida, Gulfport, Mississippi, and Dyersburg, Tennessee. He was then stationed at the 8th Air Force Bomber Station at Great Ashfield, Suffolk, England as a member of the 385th Bomber Group for the next 8 ½ months. Dad was the top turret gunner on a B-17 Flying Fortress and also served as the flight engineer. At the time of his discharge, he had reached the rank of Staff Sergeant.

During his service, he took part in two major aerial engagements including the D-Day attack on Normandy and the England-Africa shuttle bombing of the Messerschmitt aircraft factories in Regensburg. He was decorated with the Distinguished Flying Cross, signifying extraordinary achievement, courage, coolness and skill while participating is numerous bombing attacks on military and industrial targets in Germany and installations of the enemy ahead of the advancing Allied Armies in Western Europe, Air Medal with four oak leaf clusters, signifying his shooting down 4 German fighter planes, and two gold stars, signifying his part in two aerial engagements.

Another notable experience that my dad had during his career was when the plane was coming back to base after a bombing run, and the landing gear would not come down. My dad then hung upside down in the open bomb bay doors area, while being held onto by several men, and hand cranked the gear down, getting it locked just moments before the landing.

My dad rarely spoke of the war, and never thought of himself as a hero, but I know better, as did, I’m sure, the men he saved by making sure they could land safely. I’m so proud of you Dad!! I love and miss you very much!!