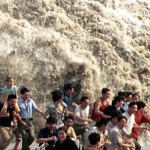 One Response to Taking Chances